There are two basic questions for FSTI at any Mach number including hypersonic Mach numbers. First, what is the impact of a flexible structure on the flowfield, and second what is the impact of the flowfield on the structure? If there is truly an interaction, i.e., FSTI, then the flow field creates motion in the structure and the structural motion creates changes in the flow field. Both always occur to some degree, so the question is when are such interactions significant? The vision of the proposed effort is to advance the current state of Fluid Structural Thermal Interactions (FSTI) that occur in hypersonic aerospace vehicles by finding comprehensive answers to the above questions. The objective of the proposed effort is to develop fundamental insights into the FSTI phenomena that occur when a shock wave is present on a structure with or without accompanying boundary layer separation at hypersonic Mach numbers. Schematic of the experimental configuration for FSI studies

The vision of this project is to contribute towards enabling precision munition with high maneuverability that can reach very tight targets. This technology has direct advantages in minimizing the spillover casualty from missile strikes as well as reducing the arsenal requirement. The central question that this effort seek to address, which forms the theme of this project is, “can we exploit the non-linear shock interactions with boundary layers that develop over missile surface to generate control forces required for high maneuverability?” State of the art multidimensional measurement techniques coupled with CFD models will be employed to understand the fin-shock interactions placed on an axisymmetric surface. An animation of planar scattering fields overlaid laid on the mean wall pressure field (left) and surface streakline image (right) is shown below. The correspondence between the off-body shock and separated flow features and the wall pressure and streaklines comes out quite vividly in these animations. S1 marks the contour of primary separation and S2 marks the contour of secondary separation line as discerned from streakline images.

The pursuit of an air-breathing single-stage-to-orbit (SSTO) vehicle has long been a driver for the development of reliable ramjet and scramjet type engines, which can achieve the compression necessary for combustion at high altitudes without the weight penalties associated with conventional turbomachinery sections. As these engines are incapable of producing static thrust, the idea of a multi-mode SSTO engine has grown in favor; such an engine would initially utilize a turbojet mode for subsonic and low supersonic flight Mach numbers. A transition to a dual-mode ramjet/scramjet would occur at a flight Mach number of about 3, with the ramjet mode providing acceleration up to approximately Mach 6, past which a terminal scramjet mode would be employed. In designing the inlet/isolator of a multi-mode SSTO, an axisymmetric mixed- compression configuration is a prudent choice due to its high total pressure recovery, good manufacturability, short overall length, and relatively well behaved flow characteristics. However, all mixed-compression type inlets are susceptible to transient events known as unstart, wherein the oblique shock system is ejected from the inlet altogether, resulting in a severe reduction of the engine mass flow rate and a subsequent loss of thrust. In the context of the dual-mode engine, the unstart issue is more prevalent in the transitional flight Mach number range before scramjet operation is established. We bring state of the art multidimensional flow field quantification tools to investigate the unstart dynamica and physical mechanisms that initiates and sustains the unstart process. Figure below shows our axisymmetric inlet/isolator unstart characterization in terms of its correspondence to Kantrowitz & Donaldson’s curve for 2D inlets (left) and the PLS imaging of the shock train inside a started inlet/isolator. Achieving reliable ramjet to scramjet mode transition without compromising the engine performance is one of the important milestones needed for hypersonic platforms. During this mode transition, the inlets are highly prone unstart, which is primarily driven by the shock boundary layer interactions along the inlet/isolators. Further, future practical inlet/isolator configurations are moving towards axisymmetric geometries owing to their superior performance characteristics and freedom from junction boundary layers. However, these geometries are highly sensitive to inflow distortions causing unstart even at very small incidence angles. In this project, we perform an experimental investigation into the mechanisms driving the separated flow growth in shock boundary layer interactions that occur in axisymmetric geometries with and without inflow distortions. Figure below shows our axisymmetric inlet/isolator half isolator model that will be used for the experimental studies. Temperature is one of the most important thermochemical variable that determine the progress of reactions that lead to pollutant formation, product conversion, combustion generated noise, among others. Most future clean energy/propulsion technologies rely on low temperature combustion, where temperature effectively is the control variable of interest. combustion environment in these is however replete with local flame extinction, large scale flame wrinkling, among other complexities. Measuring temperature in these environment is a daunting challenge since we do not have local composition information. The objective of this research effort is to overcome this challenge and develop a truly composition independent non invasive thermometry technique that can be used in a wide range of combustion environment. Adjacent figure shows the laser setup used to provide the fluorescence excitation for the present experiments and the measured CH4/N2 diffusion flame temperature field. Combustion in vitiated oxidizer environment has common occurrence in natural disasters like forest fires as well as engineering systems like Diesel engines, HCCI engines, combustors with exhaust gas recirculation, etc. Understanding the mechanisms that help in stabilizing and sustaining the combustion in these situations is important for devising safe and efficient energy systems as well as developing novel means to control the fires. Most experimental efforts were limited in the scope of thermochemical that could be measured by the available techniques and the computational efforts were limited by the details on chemical kinetics and turbulent interactions that could be resolved. We develop a unique tool set for multidimensional thermochemical measurement that will shed unprecedented light into the combustion phenomenon in vitiated oxidizer environment. Movies below illustrate the different unsteady modes the flame execute in these environments.

The vision of this project is to help develop advanced ignition modelling tools for turbulent non-premixed and partially premixed fuel mixtures by using state of the art experimental tools. The core idea is to perform detailed experiments in a validation type experimental setup (see figure below of the jet in coflow burner) to provide high quality data for model development as well as physical insights into turbulence chemisty interactions that accompany a firing and misfiring kernel. Using a suite of high-speed flame luminosity and chemiluminescence imaging, PIV and PLIF measurements, comprehensive insights into the aerothermochemical interactions that occur at various stages of ignition kernel evolution. This project is done in collaboration with an industry partner who brings in novel modelling approaches that will help augment the predictive capabilities and experimental findings. The movie below is a 20 kHz imaging of plasma/flame kernel luminosity of a laser spark initiated ignition of a turbulent fuel/air mixture. The different phases of kernel evolution and the aerodynamic stretching effects during the evolution can be clearly discerned. Development of low/no bleed inlets hold the key to future hypersonic technology. Without bleed the inlets are highly prone unstart, which is the disgorging of shock train within the inlet/isolatorsection of the scramjet to cause massive loss in thrust and fatal accidents. The initiation and perpetuation of the unstart event and the resulting transient loads involve complex interactions between separated flow along the inlet floor and corners. Uncovering the interactions between primary separation and corner separation is the central theme of this project. We bring state of the art multidimensional flow field quantification tools coupled with wall pressure measurements in the separated flows to obtain a physical and statistical understanding of the interactions. 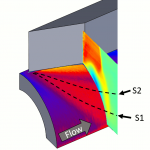 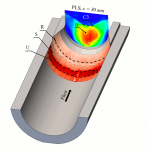